How to debug a user space application with STM32CubeIDE

This is a quality version (list all), approved on 1 April 2021. New changes may have been made.

This article is a guideline to user space project support, which is fully integrated from release 1.6.0 of STM32CubeIDE.

It covers executable, static or shared libraries support from project creation to debug. It also gives some tracks in order to easily use gtk library or to start a new project from standard Eclipse CDT project wizard.

From STM32CubeIDE release 1.6.0 it is possible to enrich an STM32MP15x hierarchical project with User Space type project.

From STM32CubeIDE release 1.6.0 it is also possible to easily create a STM32MP15x user space project from standard CDT Eclipse wizard.

In that case, the user space project is not part of any STM32MP15x hierarchical project and appears as a standalone project in Eclipse project explorer view: myCdtProject here after: 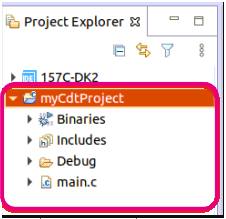