This is the stable version, approved on 11 July 2022. 3 pending changes await review.

Secure update firmware purpose is to be able to update the boot loader. TF-A itself is not updated by this process, only the FIP (optee, uboot, and their respective signatures and certificates). This is a secure update because wrong images (due to error while download, flash, or tamper) won't boot, but system is still runable, it will boot the last known working FIP after N (system defined) attempts.

To provide a secure update some area need to be reserved in the boot device.

The metadata and one backup register drive the boot process to select the FIP we want to boot.

The next figure explains how the update process download a new FIP. 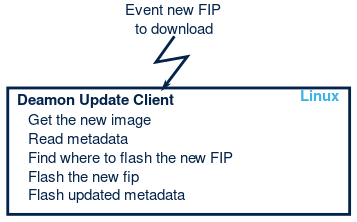 Describe the download, store process when a new FIP is availlable

Next figure explains how the boot occurs, taking into account the secure firmware update. 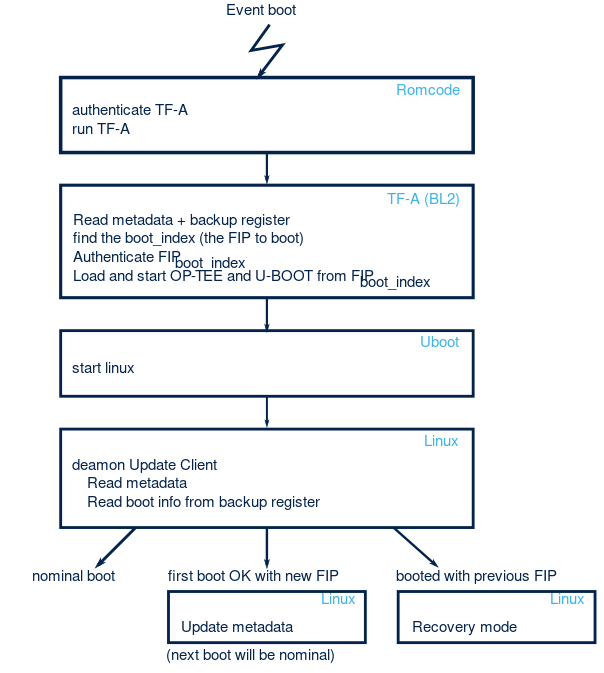 Metadata structure is defined in include/drivers/fwu/fwu_metadata.h Note that Metadata are only read by the TF-A, only the Update Client will write/update them.

Important fields for TFA in metadata are:

These fields define the index of img_prop[] currently active and the previous working index. TF-A will load, verify, then boot software of the FIP found at the active_index.

We only have one img_entry, has we only need to find one FIP (define by the haredcodec FIP UUID in img_type_uuid) from one filesystem (the boot device UUID define in location_uuid

X (X can ben 0 to 1 in OpenSTLinux (deinfined by NR_OF_FW_BANK) img_uuid define where to find the image X, directly with the UUID with a GPT partitioned device (EMMC or SD-CARD) or thanks to a correspondance between the UUID and an offset in case of RAW-NAND and NOR boot device) accepted is set to 1 by the Update Client after a full boot success on this image.

Firmware update is enabled with PSA_FWU_SUPPORT=1 in makefile. TF-A will manage FIP selection (to boot the expected FIP), and will manage recovery and error management after a new FIP has been downloaded from non secure world. As soon as the Secure Boot Update specific code has selected a FIP to boot, the boot continue as a non updatable one. TF-A will secure the boot, it checks each element in FIP are correctly signed, decipher if needed, manage anti-rollback, and if all is fine, run them.

After a FIP update the active_index is not yet accepted (we have metadata->img_entry[0].img_prop[metadata->active_index].accepted == 0) we are in Trial mode. To avoid infinite boot loop with a non working FIP, as long as we are in Trial mode, before selecting FIP, we decrement the trial counter (a Backup Register). If the trial counter is not 0, we load, authenticate, run the active_index FIP, (after a succefull boot in this configuration, the Update Agent has to update the accepted field to 1). If the trial counter is 0, we know the boot didn't go till the Update Agent in all previous attempt, this 4th time, the TF-A will load, authenticate, and run the the FIP at previous_active_index (a FIP image that was known working). This is the responsability of the Update Agent to detect that the over the air update failed, and take actions (retry download, ...). Indeed the Update Agent can read the metatadata, and knows, thanks to a Backup Register, which index value was used to select the FIP.

In regular case, the active_index FIP is known working (accepted value is 1). We load, verify, run entries from the selected FIP, and will set the Backup Register that store the number trial boot to FWU_MAX_TRIAL_REBOOT[2] (default value: 3) to prepare any future trial mode.

The Update Client responsibility is to manage the FIP update. It runs as a deamon on linux.