Approved version. Approved on: 15:47, 3 December 2021
(Pages)
How to manage OpenSTLinux projects in STM32CubeIDE

How to manage OpenSTLinux projects in STM32CubeIDE

This is the stable version, approved on 20 December 2021.

This article explains how to import OpenSTLinux v3.0 projects supporting FIP, into STM32CubeIDE from version 1.6.1 on a Linux® workstation.

It is possible to import into an existing STM32MP15 project some OpenSTLinux projects:

Device tree sources generated by STM32CubeMX into the DeviceTree/ directory of the Cortex®-A hierarchical project, are automatically included inside the corresponding OpenSTLinux projects: Linux®, TF-A and U-boot, with:

FIP is also supported, from release 1.6.1, which provides OpenSTLinux 3.0. The FIP_artifacts/ directory of the Cortex®-A hierarchical project hosts all deployment objects needed to build FIP image. Those objects are generated by TF-A, U-boot or OP-TEE projects.

It is then possible to update the running STM32MP15 target with the new build artifacts using the STM32 Cortex-A Linux Deployment > Run Configurations... menu.

In this dedicated Run Configurations... menu, build artifact (such as device tree binary, module, kernel or other) is added using the Add... button and providing:

For a new device tree, it is possible to update the extlinux.conf target file to take it into account at the next target reboot, see the Actions sub-window. 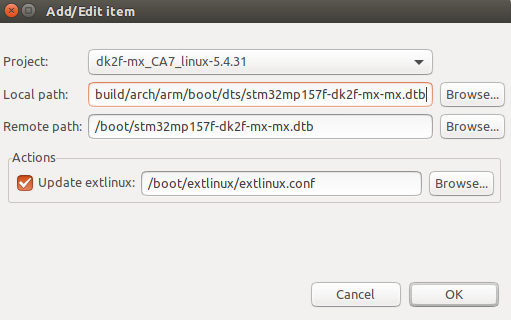 After download of build artifacts to the STM32MP15 board:

From OpenSTLinux 3.0, the boot architecture has been revisited as explained in TF-A overview. Now two objects are needed to update the STM32MP15 Flash memory device: TF-A BL2 flash partition and FIP Image. Both of them are generated inside STM32CubeIDE:

Since the FIP image relies onto three projects, some dependencies exist between TF-A, U-boot and OP-TEE. all build target in those projects is launching the fiptool, which builds the FIP image. This succeeds only if all the objects are generated.

FIP image for the generated device tree is then available from the fip directory of FIP artifact. 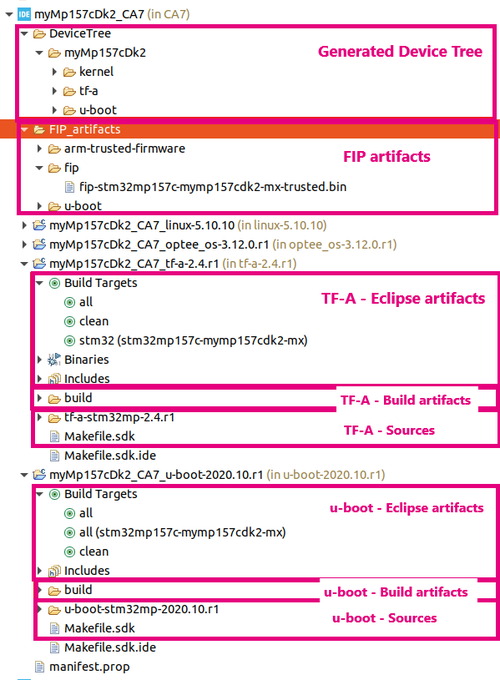 From STM32CubeIDE release 1.8.0, it is possible to update bootlader objects (TF-A BL2 & FIP image) directly on a running MP15 target. Before working with STM32CubeIDE, it is recommended to first update MP15 boot flash with STM32CubeProgrammer.

All flash devices available on STM32MP157x-EV1 (SD-Card, eMMC, NAND & NOR) are supported by STM32CubeIDE. It is possible to update them, typically with customized device tree, thanks to integrated STM32CubeMX. Note that trusted image only is supported.