It explains how to use the tool to wrap an existing FSBL image and create a debug FSBL image, suitable for attaching a debugger at boot.

This article also covers the case of closed devices that require a signed image.

Please refer to boot chain overview for a complete description of the boot process.

To debug the FSBL code, the debugger must halt the execution:

The workaround above has few drawbacks:

To halt the execution at FSBL entry point, STMicroelectronics proposes a less invasive method through the tool stm32wrapper4dbg. The image below describes how stm32wrapper4dbg works. 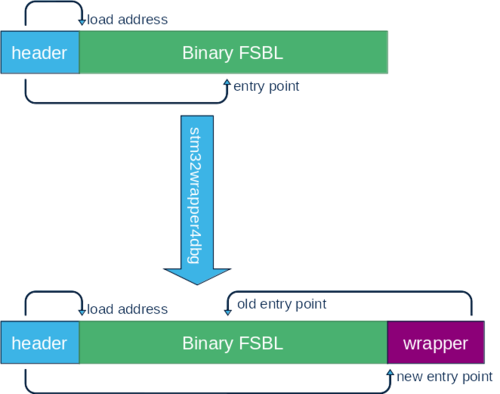 The stm32wrapper4dbg tool takes an existing FSBL image and generates a new FSBL image by appending (or prepending) a binary wrapper to the image and updating the image header accordingly. Using the new image causes the FSBL binary to be loaded in memory at the same address as before. The memory layout does not change.

Since the new image entry point is in the wrapper, it will be executed before the FSBL. The wrapper opens the debug port, waits 2 seconds for the debugger to attach, then:

The new wrapped image has to replace the original image in Flash memory for the whole debug session.

For a complete description of the FSBL image header, go through header for STM32 binary files.

Use either the Distribution Package or the Developer Package.

The tool is installed on the host PC as part of the Developer Package. It is also included as internal tool in the Distribution Package, which automatically creates a wrapped FSBL each time a new FSBL is built.

No installation is thus required.

5 Getting started with the Distribution Package[edit]

The Distribution Package creates the wrapped FSBL each time a new FSBL is built. No additional commands are required from the user.

All the wrapped FSBLs are available in the dedicated "debug" subfolders of "arm-trusted-firmware".

If a signed image is required, sign the image in "arm-trusted-firmware/debug/" following the description given in image signing.

If STM32CubeProgrammer is used for writing to the Flash memory, create a modified Flash layout "tsv" and replace the name and location of the original FSBL image file by the ones of the wrapped FSBL file, as described in flash layout description.

6 Getting started with Developer Package[edit]

To generate a Trusted Firmware-A BL2 as FSBL, go through TF-A for how to compile.

Use the following command to wrap an original.stm32 FSBL image and create a wrapped.stm32 wrapped FSBL image:

All the FSBL images created by STMicroelectronics toolchains are loaded at the lower available memory address, thus stm32wrapper4dbg appends the wrapper at the end of the image memory map. Instead, on customized FSBLs, the memory map can be different and the only available space for the wrapper can be located at the beginning of image memory map. The -b flag can be used to generate a wrapped image that has the wrapper before the FSBL. This also means that the load address is decremented by the size of the wrapper.

The wrapped FSBL image has to replace the FSBL present in the board Flash memory.

If STM32CubeProgrammer is used for writing to the Flash memory, modify the Flash layout "tsv" to replace the name and location of the original FSBL image file with the wrapped FSBL file, as described in flash layout description.

If the Flash memory is an SD card, it is also possible to plug the SD card in the Linux® PC that runs the Development Package and let stm32wrapper4dbg write the wrapped image directly into the first partition of the SD card. Assuming the SD card is recognized as /dev/sdb by the Linux PC, run:

Create a copy of an existing Flash layout "tsv" file, compatible with your board, for example:

then edit it and replace in the lines of FSBL

the path of the FSBL image with the debug version