This is the stable version, approved on 21 November 2022.

Note: in case you want to trace at boot time, it is recommended to use ftrace.

Since Yocto Kirstone version, trace-cmd recipe is present in meta-openembedded layer but not installed by default in all STM32MPU Software Packages.

When testing the new image on the target board, trace-cmd can be found in the following path:

However, an additional configuration of the Linux kernel must be performed to obtain the trace.

This is the reason why you can not use this tool in Starter and Developer Packages context.

It is possible to get filtered trace with both function and graph function mode.

It is also possible to trace specific prints done in the source file.

You first need to mount the tracefs:

To find out which tracers are available, simply cat the available_tracers file in the tracing directory:

Note that you must be placed on the target board within a directory path where you have access rights for writing the generated trace file.

The example below shows how to filter on a set of functions that contains uart:

- To get a trace on UART, you can connect to the target board with the new console (i.e. through ssh), and then type a simple command, like "ls"
- Then press Ctrl-C to stop the trace

See below for reading the trace.

The example below shows how to filter on a set of graph functions that contains uart:

- To get trace on UART, you can connect to the target board with the new console (i.e. through ssh), and then type a simple command, like "ls"
- Then press Ctrl-C to stop the trace

See below for reading the trace.

Command to read the trace:

By default, it reads the previously created file trace.dat at the position where the command is entered.

If you want to specify an other file name:

kernelshark can read trace-cmd report and produce a graph and list view of the data. Please refer to kernelshark home page[2] for detail.

It can be done by opening kernelshark and then opening trace.dat file from the menu, or using the following command:

Here is the example of a trace filtered with UART function_graph mode: 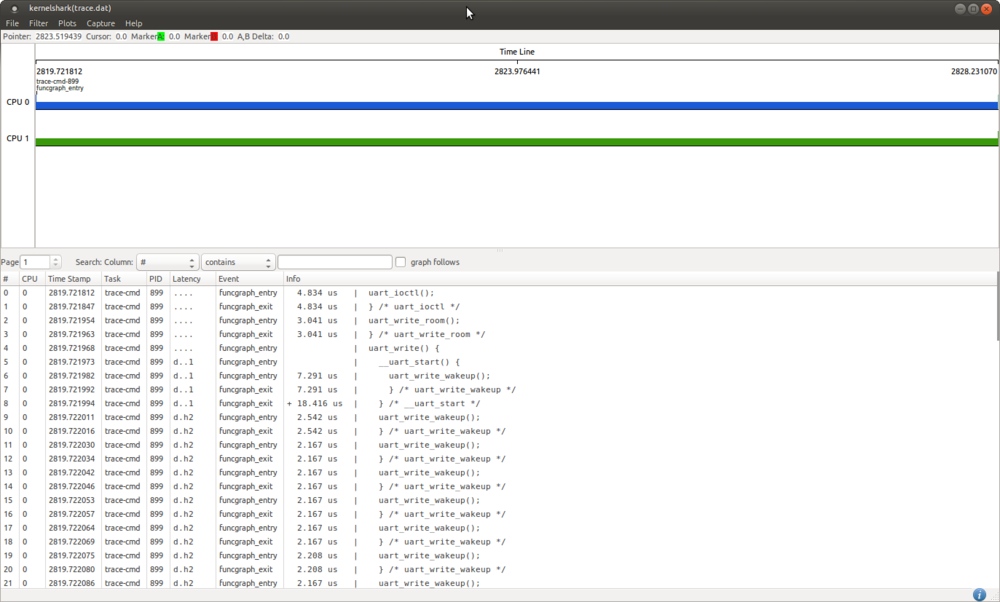