This is the stable version, approved on 23 November 2022.

To meet the new market security requests and protect customers against any leakage of their IPs, STMicroelectronics introduces a security feature, the secure secret provisioning (SSP), allowing the OEM secrets programming into STM32 MPU one time programming (OTP) area in a secure way (with confidentiality, authentication and integrity checks).The STM32MP1 Series supports protection mechanisms that allows the protection of critical operations (such as cryptography algorithms) and critical data (such as secret keys) against unexpected access.
This wiki gives an overview of the STM32MP1 Series SSP solution with its associated tools ecosystem.

The SSP is a secure system mechanism implemented in STM32 microprocessors that allows secured and counted installation of OEM secrets in untrusted production environment (such the OEM contract manufacturer).
The SSP process prevents the OEM secrets from: 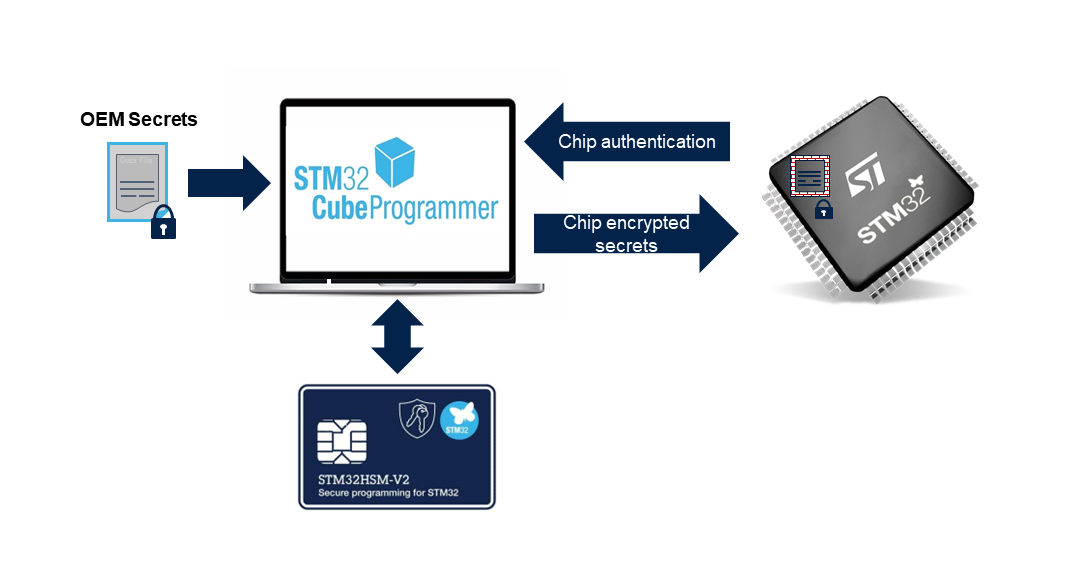 Following the STM32 MCU SFI strategy, the SSP processing relies on an STM32 Hardware Security Module[1] (HSM) to manage chip authentication and and to unwarily encrypt exchange data with STM32 chip. The chip authentication allows to count the number of provisioned devices. The STM32 HSM is connected to the programing tool (STM32CubeProgrammer presented as an example) that uploads the encrypted data to the chip.

The ROM code has a complete access to chip data. During the SSP process, it is in charge of:

The TF-A BL2 SSP Firmware is a specific code that extends the communication with the programming tool and is in charge of specific SSP commands, it:

This part of code is using part of TF-A BL2 generic code but is only restricted to serial connection mode and OTP access. The TF-A SSP size is limited to the minimum but required a dedicated board configuration (over device tree).

This is an essential tool for the OEM to manage a complete encrypted secret package and customize the HSMv2 to the untrusted manufacturer.

A dedicated page how to deploy SSP: a step by step approach explains how to configure and run a complete SSP process.