This is the stable version, approved on 4 October 2022.

1 What is NanoEdge AI Library for anomaly detection?

When embedded on microcontrollers, it gives them the ability to easily "learn" and "understand" sensor patterns, by themselves, without the need for the user to have additional skills in Mathematics, Machine Learning, or data science.

The NanoEdge AI static library for anomaly detection is the code that contains an AI model (for example, as a bundle of signal treatment, Machine Learning model, and optimally tuned hyperparameters). It is designed to gather knowledge incrementally during a learning phase to become able to detect potential anomalous machine behaviors, and possibly predict them.

2 What is the intelligent sensor processing unit (ISPU)?

The ISPU (intelligent sensor processing unit) is an embedded programmable core that allows reading sensor data and processing it inside the ISM330ISN device and can directly provide, when necessary, the results of said processing to an external microcontroller. The ISPU can run any type of processing, from basic signal processing to AI algorithms. NanoEdge AI Studio provides ready-to-use anomaly detection binary for the ISPU.

As described above, NanoEdge AI Library is designed to detect anomalies from a signal. It runs continuously in the ISPU as it is an always-on device. A learning phase in needed to learn the nominal behavior of the device monitored. This phase can be started and stopped by sending commands from the main MCU to the ISPU. This learning phase creates the knowledge of the NanoEdge AI Library. Considering that the ISPU does not have any on-board non-volatile memory, the knowledge is lost each time the device is powered down.

Once the learning phase is done, the ISPU can be set in detection mode. The monitoring is done continuously. Each time a signal is detected as abnormal, the ISPU raises an interruption. If opted for, the ISPU can send the raw data of the corresponding signal.

4.1 NanoEdgeAI Studio with the ISPU

In NanoEdge Studio, select the ISM330ISN in the target list.

Once a benchmark is complete, the Deployment section is enabled. Select the corresponding benchmark, and the datarate/fullscale settings as shown below.

After clicking Compile and selecting the library type, a .zip file is downloaded to the computer. 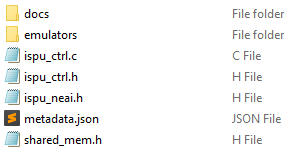 This file contains the complete binary. It must not be modified. It declares an array used in the initialization phase to load the binary in the ISPU's memory.

Those files are used to control the ISPU. It includes all the functions needed for initialization, for sending commands, processing the outputs, and so on.

The ISPU can be connected via I²C or SPI. In both cases, to simplify the use of theispu_ctrl library, ispu_write and ispu_read must be filled with the I²C or SPI read and write functions depending on the library used.

The ISPU uses two GPIOs to raise interruptions. Using these interruptions, it is possible to put the main MCU in a sleep mode and only be wake it if an anomaly happens. Both GPIOs must be configured in rising edge only, no pull.

Communication is based on:

The MCU controls the communication protocol. To send a command, it writes a command and its arguments into the shared memory. Then, the ISPU detects a new command. The MCU fetches the interruption, gets the status of the command execution, and if needed, sends the next command.

As mentioned above, the ISPU does not have on-board non-volatile memory. The ispu_neai.h contains an array with all the register values that have to be sent though the I²C/SPI.

The NanoEdge AI Library in anomaly detection needs a learning phase. This learning, happening in the ISPU, creates the knowledge of the library. All the signals learned are then considered as nominal by definition. The learning mode can be set at any time to run additional learning iterations an add new nominal signals to the knowledge. The ISPU does not have on-board non-volatile memory, hence, the knowledge is lost each each time the ISPU is powered down.

In learning mode, the ISPU gets new data from the accelerometer and updates the knowledge, until another mode is turned on. INT2 is raised each time a signal has been learned. It helps to count the number of learning iterations done. However, the most important is to create a complete learning with all the nominal regimes. The whole range of nominal behaviors for the target application must be learned.

Each time the signal is identified as abnormal, the ISPU raises INT2 and continue its monitoring.

This mode triggers an interruption only if the signal is identified several times consecutively as abnormal.

If the ISPU raises an interruption in detection mode (meaning that the last signal was abnormal), it is possible to fetch this signal to save it in the MCU memory for further analysis. To do so, a FETCH_DATA command must be sent. When ready, the ISPU answers by raising the INT1 pin. This mechanism is used to communicate between ISPU and MCU. It is used until the signal is fully fetched. The process_answer() available in ispu_ctrl.c is called each time INT1 is raised to process this asynchronous communication. Please refer to the "Hello World!" example below for further information.

By default, a signal is considered as abnormal when its similarity is below 90%. This value can be modified using the command below: