The ST motor control ecosystem includes the STM32 motor control software development kit (to install it, download it from the X-CUBE-MCSDK web page). Its purpose is to speed up the evaluation and development of a FOC or 6-step algorithm for permanent magnet synchronous motor (PMSM) applications.

The STM32 MC SDK is running on STM32 MCUs that implement an advanced timer (refer to the appropriate release note for more information). It is composed of:

Refer to the STM32 MC SDK release note provided with each released version.

The STM32 MC SDK is available in two versions of the X-CUBE-MCSDK deliverable:

The main limitations of STM32 MC SDK version 5.Y are:

This tool automatically measures the electrical parameters of PMSM motors. The characteristics of an electric motor may not be known and can be determined in less than a minute.

It is built on a brand-new communication protocol that allows faster and more reliable communications while consuming less MIPS from the MCU.

With this protocol, internal motor control signals are monitored in real-time with no or controlled subsampling.

2.1 How to create a motor control project

First read the STM32 MC SDK getting started manual (UM2374). Then, start either from a motor control example project, or design a new project.

2.2 How to handle a project made with a previous version of the STM32 MC workbench

The STM32 MC workbench automatically migrates an older *.stmcx file to the current version. Before the migration, an information window pops up requesting confirmation. Click yes if you agree with this conversion (after migration, the previous configuration is lost).

2.3 How to get a project framework for a particular IDE (such as IARTM or Keil®)

2.4 Why does not the STM32 motor profiler tool recognize my motor?

If the STM32 motor profiler tool does not recognize your motor, proceed as follows:

If you still face problems, profile your motor manually using the following procedure: How To manually configure the motor parameters.

2.5 Why does not my motor start immediately?

Although your motor is running fine, it does not start immediately. The reason can be one of the following:

2.6 How to choose the basic set of ramp-up parameters for a given motor

Most of the time, setting the ramp-up parameters as follows ensures a correct start of the motor:

After a first successful start, fine-tune these parameters. 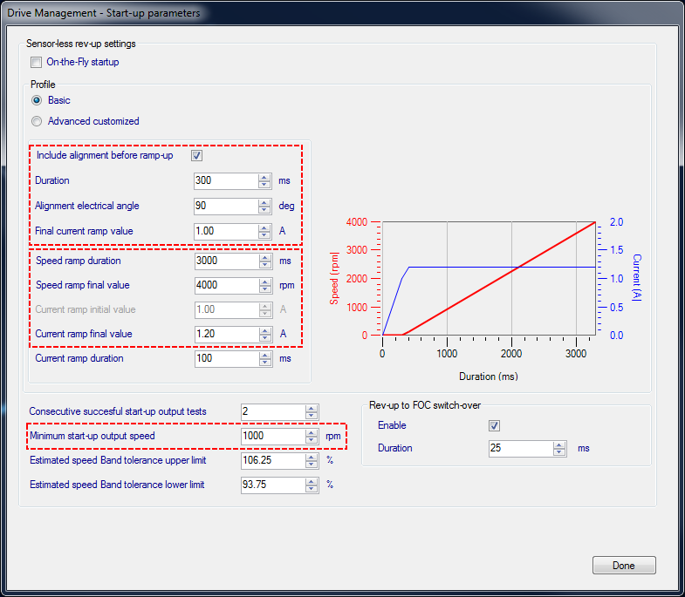 2.7 How to choose the PWM frequency and the FOC execution rate

The choice of the PWM frequency and the FOC execution rate is a compromise between available speed and switching losses:

2.8 Why do I have an “FOC duration” fault message and the motor does not even try to start?

This fault message appears when the FOC execution rate is too high and the FOC algorithm computation does not fit in the PWM period.

Open the "Drive Settings" window and decrease the ratio between the PWM period execution rate in the "Torque and flux regulators" section as shown below (for example increase this execution rate by one).

2.9 Why do I have an “Over current” fault message and the motor does not even try to start?

This fault message appears in the following situations: 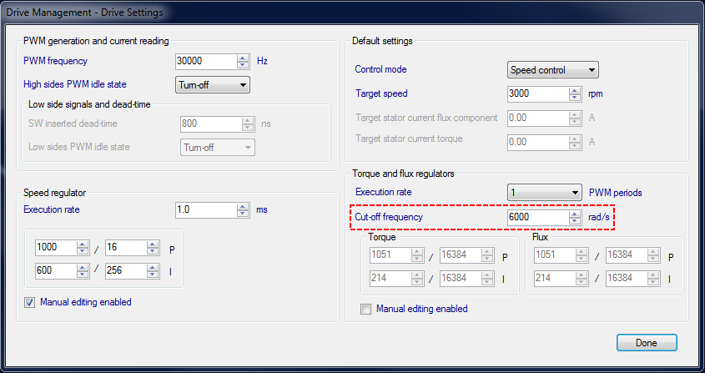 2.10 Why do I have a “Speed feedback” fault message during the acceleration phase and why does the motor stop?

This fault message often appears following an abrupt torque variation demand at the end of the startup phase. As a result, the "Back-EMF estimator" is spoilt. 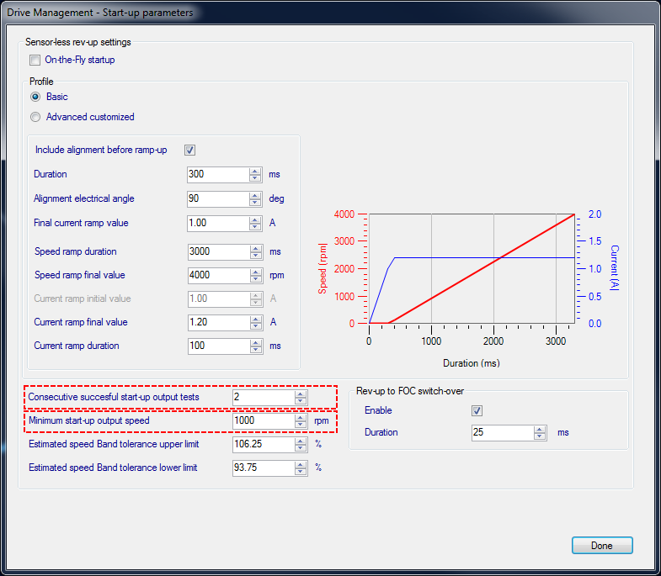 2.11 Why do I have a “Startup failure” error message during the rev-up phase and why does the motor stop?

This fault message typically appears because the current provided to support the required speed acceleration is not sufficient. To solve this issue, proceed as follows: 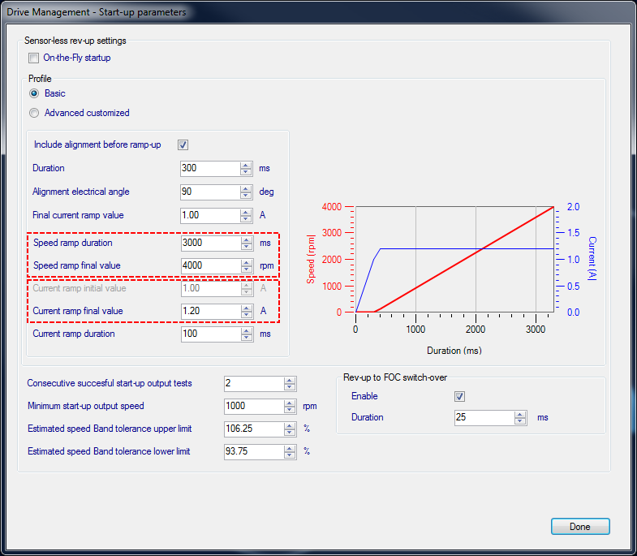 2.12 Why do I have a “Startup failure” error message during the acceleration following the rev-up phase and the motor stop?

This fault message often appears following an abrupt torque variations demand at the end of the startup phase. This spoils the Back-EMF estimator. 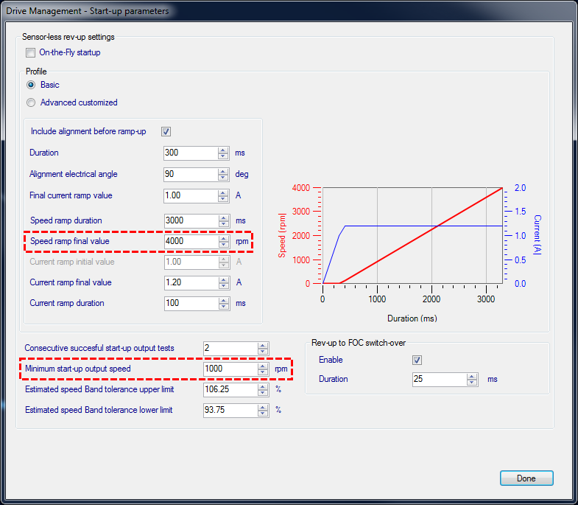 2.13 How to interface the STM32 MC firmware library

Refer to the online firmware reference information that contains the below information and more:

2.14 How to choose the hardware power board

As a consequence, the motor spin must be adapted to the selected power board range.

The best case is of course when the maximum current of the motor is part of the current range offered by the selected power board.

2.15 How to debug a motor control application

A motor control application cannot use the standard debug mechanism which consists in hardware or software breakpoints for holding the program.

The reason is that during the break, the application loses the real rotor position with respect to the needed magnetic field computation phasing defined by the firmware execution.

So, the DAC (or an emulated DAC, thanks to a PWM output) and/or the USART communication are used as outlined below: 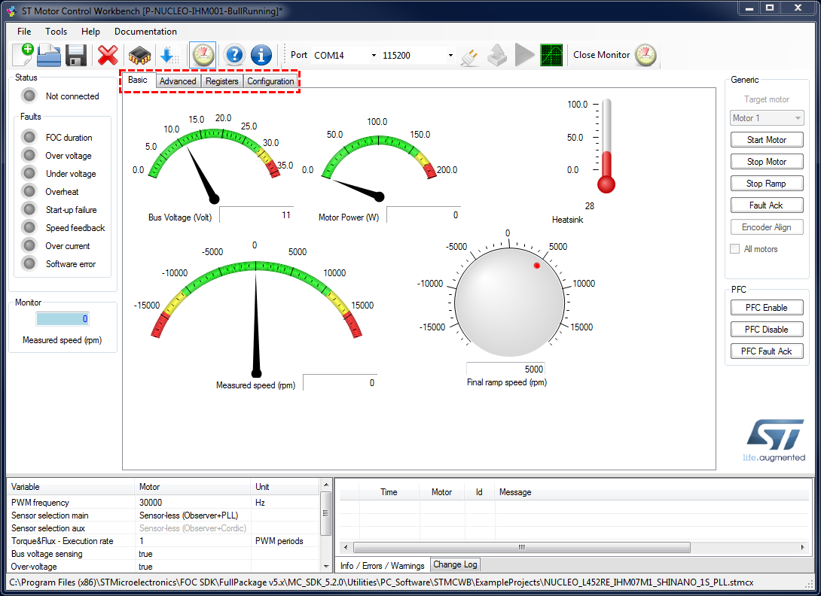 2.16 How to make the current more sinusoidal when the motor spins

One possible cause is that the PI gains of the speed regulator are incorrect.

Decrease the KP gain and adjust the KI gain (evaluating the speed regulation) to check over/undershooting during transients.

2.17 How to tune the PI speed regulator

Among the possible ways, an example is described below: 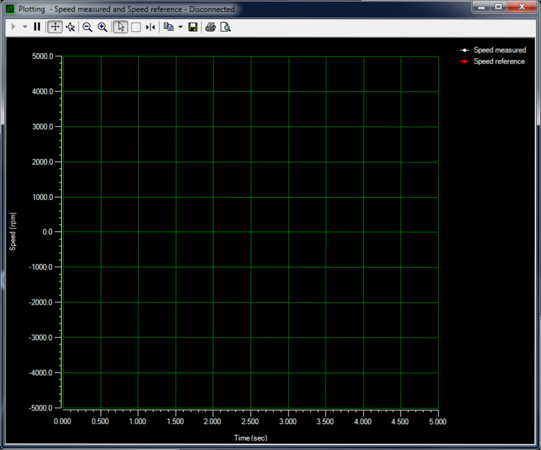 2.18 How to connect ICS with the MC FW library

The STM32 MC FW library operates only on phase U and phase V. Connect each ICS to these phases.

2.19 Why using FOC as opposed to 6-step control for PMSM drive?

2.20 Why using 3-shunt as opposed to a 1-shunt resistor implementation for current measurement?

Using the 1-shunt implementation for measurement is the cheapest solution.

However, some motors (such as low-inductance motors) require current measurements on two phases simultaneously. Only the 3-shunt implementation manages this configuration.

They are accessible from STM32 MC Workbench first page.

The STM32 MC SDK version 5.Y is a first step in our innovative roadmap. It includes: