This is the stable version, approved on 31 January 2022. 2 pending changes await review.

Insights of the firmware and how to customize it.

This manual describes the way the user can open the ready-to-use examples as well as how to configure a set of parameters in order to customize the example as the target application.

In the following sections a short description of the main blocks of the algorithm is also provided.

A brushless three-phase motor is composed as shown in Figure 1 by a fixed element, called stator, made of a set of three windings (such as phases) connected together at one side, and a moving element containing an internal permanent magnet called rotor. The rotor may have several pole pairs regularly distributed around the stator. 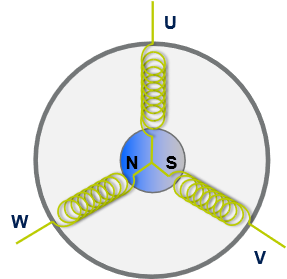 In six-step driving, the electrical cycle is divided into six commutation steps. At each step, the bus voltage is connected to one of the three phase windings of the motor while ground is connected to a second winding, forcing a current flowing through these two windings, and generating a stator magnetic field as shown in Figure 2. The third winding remains floating. 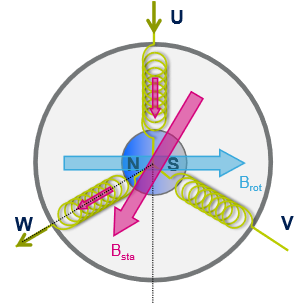 The orientation of the stator magnetic field is changed energizing the windings in the sequence shown in Figure 3. 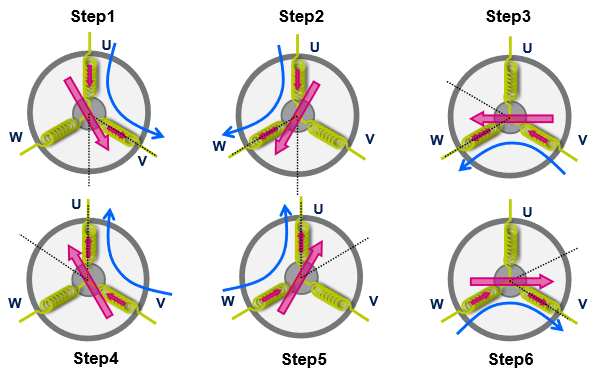 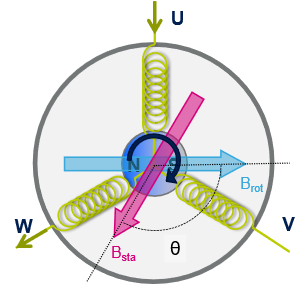 The 6-step firmware reveals the position of the motor rotor every 60 electrical degrees (in sensor-less or sensored mode). Based on this information, it computes the time for the next step commutation, and calculates the duty cycles for the PWM signals that drive the output power transistors. These transistors control the motor phase voltages allowing to reach a target speed.

The 6-step firmware can be viewed as a set of components, each with a different task. 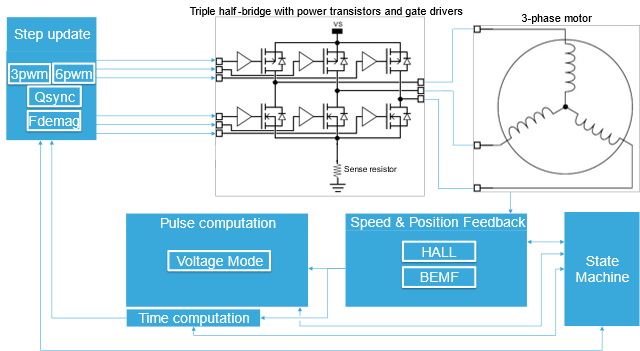 The following list describes the components shown in Figure 5:

The motor speed is controlled by varying the duty cycle of the pulse width modulated voltages applied to the motor phases.

In the sensor-less mode, the position of the rotor is obtained by detecting the zero-crossing of the Back ElectroMotive Force sensed at the floating phase. This is commonly done using an ADC as shown in Figure 6. In particular, when the magnetic field of the rotor crosses the high impedance phase, the corresponding BEMF voltage changes its sign (zero-crossing). The BEMF voltage can be scaled at the ADC input, thanks to a resistor network controlled by a GPIO. When the GPIO output is low, the resistor network divides the voltage coming from the motor phase.

The BEMF zero-crossing detection is assessed through two different thresholds: one taken when the BEMF is expected to rise, and the other one when expected to fall. These two thresholds assume different values depending on the PWM state during BEMF voltage acquisition. In particular, the threshold nominal value is 0 V if BEMF is acquired during the PWM OFF-time, and VBUS/2 if BEMF is acquired during the PWM ON-time (voltage range adjustment is carried out during an ON-time acquisition thanks to the activation of the resistor network divider).

When a BEMF voltage zero-crossing is detected (= the acquired value crosses the threshold), the FW reprograms an MCU timer, designated as the LF timer, with a period equal to half of a step time. Once elapsed, an interrupt is triggered. Then, the next step is applied. The time between the zero-crossing detection, and the step commutation can be tuned by changing the ZCD_TO_COMM parameter (see section 4.2.2).

After a step commutation, a new motor phase becomes floating. Before starting to acquire the BEMF voltage on that phase, it must be demagnetized thus avoiding the noise coming from the demagnetization current to affect the measurement. The demagnetization time can be customized by the user in tenths of percentage of the step time by changing the RUN_DEMAG_TIME_STEP_RATIO parameter (see section 4.2.3)

Since BEMF voltage is proportional to the speed, during startup, the firmware cannot rely on zero-crossing detection to determine the rotor position. Hence, the motor is accelerated in open loop control and BEMF acquisition is activated once a pre-configured target speed is reached. The start-up procedure includes the following phases:

Alignment: the motor coils are energized to have the rotor aligned to a known position

Acceleration: the steps are changed following a constant acceleration imposed by the FW

Validation: once a pre-defined start-up speed target is reached, BEMF acquisition starts and speed loop is closed once zero crossing is detected

One or more error flags are raised when one of the the following event occurs:

For a better understanding of the firmware, a short description of the tasks performed by the firmware in the sensor-less driving mode is provided:

In this driving mode, the positioning of the rotor is obtained by reading the digital signals coming from the Hall sensors (connected to three GPIOs). Based on the detected Hall status, the firmware uses two truth tables (for clockwise and counterclockwise directions) to infer the step number and to decide which phases to energize, as shown in Figure 7.

During the alignment time, the position of the rotor is acquired and the motor windings are energized according to Figure 7. As soon as the rotor moves and the Hall status changes, the motor is assumed running.

When a sensors commutation is detected, the new status is acquired. At the same time, the step is changed and the PWMs updated accordingly.

One or more error flags are raised when one the following event occurs:

For a better understanding of the firmware, a short description of the tasks performed by the firmware in sensor driving mode is provided:

The following table shows supported examples with a list of driving mode capabilities and pre-configured motor:*

The projects can be opened from the main window of the MCSDK, in the section @Example Projects@.

After choosing one of the available 6-step examples, the user must save it to an empty folder location but MUST NOT rename it, otherwise the example does not properly work.

A folder with the same name of the project containing the #example_name.ioc file is created.

Clicking on the "down arrow" icon on the task menu, the user is asked to select one of the available IDEs (EWARM, or MDK-ARM or ST STM32CubeIDE). By clicking on the UPDATE button, the source code generation starts. Note that the GENERATE button usage might overwrite the existing default values resulting in a generation process failure.

The output is saved in the working folder: The code is ready-to-use with the default motor listed in Table 2. The project can now be opened and built with the selected IDE and the resulting binary image loaded into the MCU board.

The default algorithm values, as well as the motor parameters, can be customized through STM32CubeMX.

In particular, the user might open the #example_name.ioc file with STM32CubeMX in the working folder, then select the “Middleware” category on the left-side menu and “MotorControl” option.

In the “Configuration” window, “Parameter Settings” tab, the available parameters are listed. Once the user has completed the modifications, the source code is updated by clicking on the “GENERATE CODE” button. If the parameter of interest cannot be found in this section of STM32CubeMX, see the instructions to follow in section 4.3.

To improve the user experience with the examples, a dedicated GUI for 6-step firmware has been developed.

The user can select it and load it from the “GUI” menu of the Motor Pilot application, clicking on “Load GUI” and browsing in the MCSDK installation folder \Utilities\PC_Software\STMotorPilot\GUI\defaultApp_6STEP.qml. 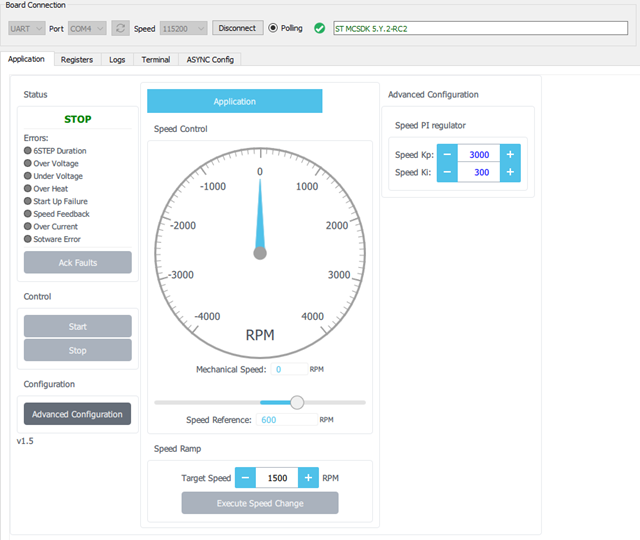 The connection with the board can be established by selecting an available COM port with baud rate 115200.

Additionally, proportional and integral gains of the speed loop can be changed by clicking “Advanced Configuration”.

In the following sections a detailed description of the 6step parameters that can be set in STM32CubeMX is provided. When changing the motor, these parameters may be adapted accordingly.

The LF timer is used to compute the speed of the motor and to update the timer settings according to the current step of the 6step sequence, both in sensor-less and Hall sensors driving mode. The user must take into consideration the speed range the application is going to target when changing the default values.

As described in section 3.3, to detect the zero crossing, the algorithm compares the BEMF voltage with two different thresholds. Depending on the fact that BEMF voltage is expected to increase or decrease during the current step, this threshold assumes different values when the ADC triggering is performed during the ON or the OFF-time of the PWM driving signal. The following parameters are used only in the projects with sensor-less driving mode to determine the position of the rotor.

The following parameters are used to configure the demagnetization time (refer to section 3.3) in the projects with sensor-less driving mode.

The following parameters are used only in the projects with Hall sensors positioning feedback.

The following parameters allow the configuration of the start-up procedure (alignment, acceleration and validation phases).

The proportional and integral gains of the speed loop controller can be changed run-time with the Motor Pilot interface through the “Speed Kp” and “Speed Ki” controls in the “Advanced Configuration” tab.

When the microcontroller switches from one step to the next, the non-excited winding needs a certain demagnetization time. During this time, the current in the winding continues in the same direction but decreases to zero. To accelerate the demagnetization, the PWM signal must be applied to the low-side switch during the step when the demagnetizing current is flowing from the bridge to the motor phases. Refer to Table 3 for a description of the firmware implementation

The FAST_DEMAG enables the fast demagnetization option, changing the driving signals during the demagnetization phase according to the below table. Refer to UM0708 for further details.

By default, the power stage is driven by the algorithm in fast decay mode.

At the start of the OFF-time, both the power MOS of the energized phases are switched off and the current recirculates through the two opposite freewheeling diodes. The current decays with a high di/dt since the voltage across the coil is the power-supply voltage. After the deadtime, the low-side MOS and the high-side MOS in parallel with the conducting diode are turned on in synchronous rectification mode (see Figure 9).

In applications where the motor current is low, the load current may decay completely to zero and rise in the opposite direction.

QUASI_SYNCH and FAST_DEMAG options are incompatible one another. When both are enabled, only FAST_DEMAG is considered.

The following parameters may be changed if a different motor is selected for the target application.

If, after opening the example project with STM32CubeMX, a configuration parameter cannot be found in the Middleware->MotorControl->ParameterSettings window the following procedure must be followed: