Cryptography is a fundamental block for implementing information security. It deals with algorithms that process data in order to grant certain properties, depending on the application needs:

These services can be used by one of the following cryptography branches. 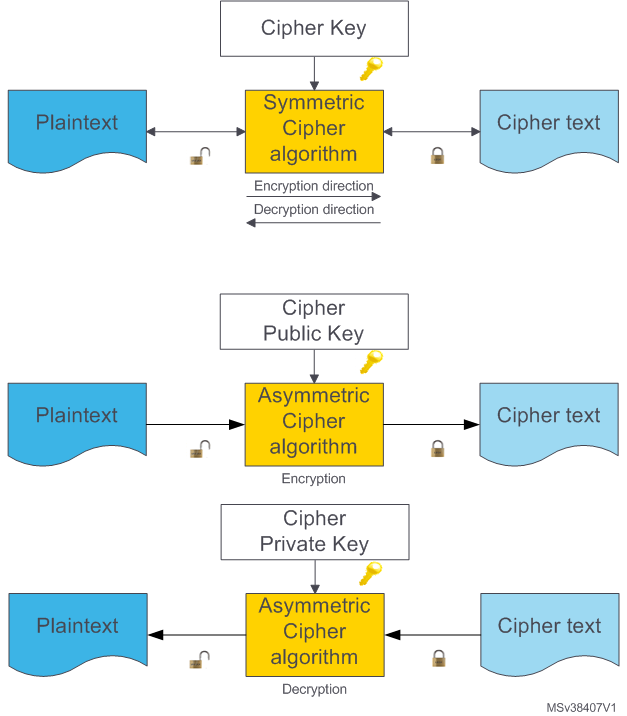 This is a cipher that uses a single key for encryption and decryption. The key is shared between both entities (that which encrypts the plaintext and the one that decrypts the cipher text).

The ciphertext security relies mainly on the secrecy of the key, which must be securely shared between two entities.

Cipher that uses two keys, a public key for encryption and a private key for decryption. These keys are generally generated by putting a large random number into a complex mathematical algorithm to generate a key pair.

The ciphertext security relies mainly on the parameters of the mathematical algorithm (curve order, modulus length and so on) since the private key is never shared and remains an owner entity.

A cryptographic Hash function is a type of one-way function with additional properties that can be used for integrity checking. This deterministic algorithm takes an input data block of arbitrary size and returns a fixed-size bit string, called digest. Hash functions are built in such a way that it is computationally infeasible to:

Digital signature is a mechanism by which a message is authenticated, that is, proving that a message comes from a given sender in a similar manner to a signature on a paper document. This is based on asymmetric cryptography; the private key is used to sign the message, while only the public key is required to verify signatures. Therefore only the owner of the private key can compute signatures, while anyone can verify them.

RNG (random number generator). The secure aspect of cryptography algorithms is based on the impossibility of guessing the key or the additional, one-time usage data used, for example, to sign a message. Therefore, keys and additional data must be random. To perform this generation an RNG algorithm can be used; it receives an entropy string as an input that must be generated by a source of true randomness (for example a true random number generator peripheral) and produces a cryptographically strong random output of much larger size.

Each of the above branches of the cryptography standard needs to be used according to the application level requirement.