The next section lists all partitions used on STM32MP15 boards (size, name, and content), and the following sections show how they are mapped on the different types of Flash memory.

The tables below list the partitions defined for STMP32MP15 boards.

(*): The partition size depends on the Flash technology, to be aligned to the block erase size of the Flash memory present on the board: NOR (256 Kbytes) / NAND (512 Kbytes).

(*): The partition size depends on the Flash technology, as it should be aligned to the block erase size of the Flash device present on the board (256 Kbytes for NOR and 512 Kbytes for NAND).

The SD card has to be partitioned with GPT format in order to be recognized by the STM32MP15. The easiest way to achieve this is to use STM32CubeProgrammer.
The ROM code looks for the GPT entries whose name begins with "fsbl": fsbl1 and fsbl2 for example.
Note: The SD card can be unplugged from the board and inserted into a Linux host computer for direct partitioning with Linux utilities and access to the bootfs, rootfs and userfs partitions. The file system is Linux EXT4. 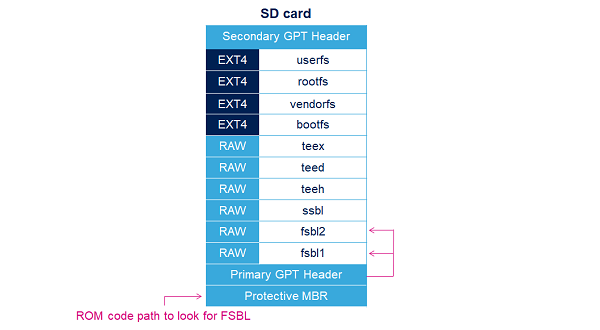 STM32CubeProgrammer has to be used to prepare the e•MMC with the layout shown below, and to populate each partition. 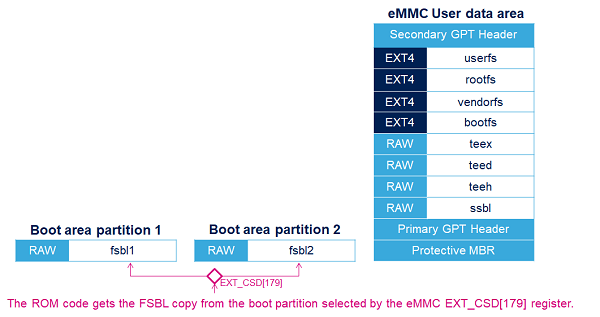 As NOR Flash memory is expensive, its size is usually limited to the minimum needed to store only the bootloaders. The system files (bootfs, rootfs and userfs) are usually stored in another Flash memory, such as the SD card in OpenSTLinux distribution.
STM32CubeProgrammer must be used to prepare the NOR Flash and the SD card with the layout shown below, and to populate each partition.

It is possible to use an e•MMC card or NAND as second-level Flash memory, rather than an SD card. This requires the following aspects to be changed:

STM32CubeProgrammer has to be used to prepare the NAND Flash memory with the layout shown below, and to populate each partition. 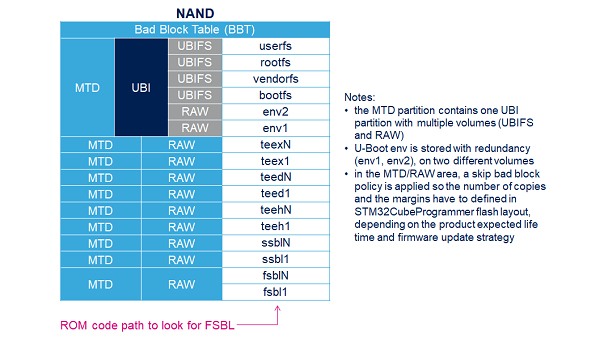 Single-Level Cell is a kind of NAND flash