Introduction to Azure RTOS® with STM32

The STM32 middleware solution is constructed around Microsoft® Azure® RTOS MW and other in-house (ST USB, OpenBL) and open source stacks (FreeRTOS™, FatFS, LwIP, mbedTLS, LibJPEG). All are integrated and customized for STM32 MCU devices and enriched with corresponding application examples based on STM32 evaluation boards.

More information relative to general STM32Cube offer can be found on the STMicroelectronics website.

For currently public STM32 series (introduced up to 2020), Azure® RTOS integration is planned as a software STM32Cube Expansion Package enhanced for the STM32 Toolset (such as X-CUBE-AZRTOS-H7[6] for the STM32H7 Series[7]). The expansion is built on STM32Cube software technology to make the portability across different STM32 microcontrollers easy and to allow the user to benefit from STM32CubeMX[8] or STM32CubeIDE[9] software tools native features alongside the Azure® RTOS applications. New STM32 series introduced starting from 2021 benefit from a direct integration of Azure® RTOS embedded software components within the matching STM32Cube MCU Package. For instance, for the STM32U5 Series, the matching STM32Cube MCU Package named STM32CubeU5 features Azure® RTOS directly.

Once integrated within STM32Cube, whether in an STM32Cube Expansion or MCU Package, Azure® RTOS benefits from many additions done by STMicroelectronics:

ThreadX is required to implement FileX, LevelX, NetX Duo or USBX, a “bare-metal” implementation is also planned in the future for USBX and FileX.

Azure® RTOS MW stacks are also interdependent. In fact, some USBX Host classes are using the FileX APIs, while other USBX device classes require the NetX Duo APIs. LevelX is used by FileX to support file system on NAND and NOR memories.

The Azure® RTOS APIs are hardware agnostic, they run seamlessly on all supported hardware and peripherals. Each middleware has its own low-level driver to support specific hardware peripherals. These drivers are implemented using the HAL and BSP drivers to ensure portability among different STM32 Series and boards. 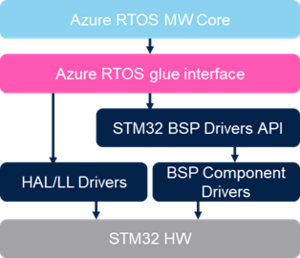 As for all STM32Cube MCU and Expansion Packages, BSP configuration in STM32CubeMX[8] is not supported for STM32 Azure® RTOS.

Azure® RTOS for STM32 is distributed by STMicroelectronics on different channels to adapt to the different needs and profiles of STM32 users. The figure below shows the different ways to start with X-CUBE-AZRTOS-H7 (STM32H7 used as example for illustration).

This is the standard way to get the package: the user downloads a self-contained package containing the STM32 drivers, Azure® RTOS MW & STM32CubeMX[8] configuration files and ready to use applications. Different usage approaches are possible:

Azure® RTOS is delivered as a software STM32Cube Expansion Package enhanced for STM32 Toolset, to allow users to benefit from STM32CubeMX[8] or STM32CubeIDE[9] software tools native features alongside the Azure® RTOS applications.

Once the package is installed, the user has two possibilities to use Azure® RTOS:

Depending on the STM32 series used:

A training video is available[14] to show in details how to setup and use the Azure® RTOS STM32Cube Packages. Check STMicroelectronics website for more videos [11]

Along with the Azure® RTOS MW solution, STM32 support other CoreMW stacks based on ST development:

These stacks are provided in the STM32Cube MCU and Expansion Packages (except when delivered natively with Azure® RTOS MW) and in ST GitHub repository. For each stack, multiple combinations of examples and demos are provided in order to help building your own application. Besides, USB, FreeRTOS™, FatFS and LwIP stacks are supported by STM32CubeMX[8] code generation and customization.

For each Classic CoreMW , refer to the relative ST Wiki page to get more information.

The STM32Cube MCU Packages and STM32Cube Expansion Packages are delivered under the global SLA0048[15] software license agreement. Individual software component copyrights are described in the table below: