Azure® RTOS LevelX is a library offering wear-levelling and bad-block management features for Flash memories. LevelX is not intended to provide FileSytem APIs, but only low-level APIs to read, write, and erase sectors in Flash memories. Combined with FileX, it allows seamless use of NAND and NOR Flash memories as media storage devices.

LevelX is designed in a modular way that facilitates the support of any Flash memory. In fact, LevelX requires a low-level driver interacting with the Flash memory to support the basic raw API, read blocks, write blocks, erase blocks, and check errors. These raw APIs are then logically combined to offer more user-friendly high-level APIs. The main features offered by LevelX are:

Further details are available in the LevelX official documentation

LevelX must be used alongside with FileX. Please refer to the FileX page "How To Use" section for more details about how to use LevelX 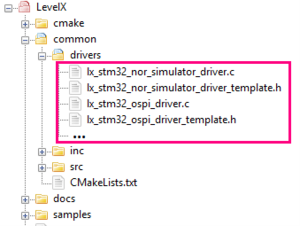 Configuration flags can be defined by the user in the “xxx_driver_template.h” file. The LevelX driver Octo-SPI header template file below is an example:

STM32 Packages provide the following set of applications (the supported applications list may differ between products and boards):