This is a quality version (list all), approved on 2 April 2021. New changes may have been made.

First step to enable the authentication is to burn the OTP WORD 24 to 31 in BSEC with the corresponding public key hash (PKH, output file from STM32 KeyGen). OpenSTLinux embeds a stm32key tool that can be called from U-Boot command line interface to program the PKH into the OTP.
Make sure that a trusted image was programmed on your board, because below operation will not be possible with optee boot.

In a second step, FSBL binary must be signed. STM32 Signing tool allows to fill the STM32 binary header that is parsed by the embedded software to authenticate each binary. 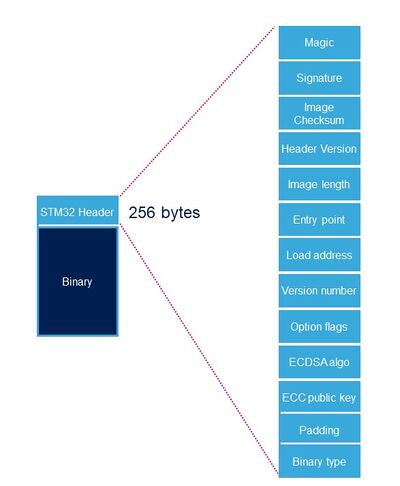 Each binary image (signed or not) loaded by ROM code needs to include a specific STM32 header added on top of the binary data. The header includes the authentication information.

Once the image is signed, it can be programmed into the flash on the target board with STM32CubeProgrammer.

Before really starting the authentication process, the ROM code compares the hash of the public key carried in the STM32 header with the one that was provisioned in OTP.