This is the stable version, approved on 28 January 2022. Template/file changes await review. 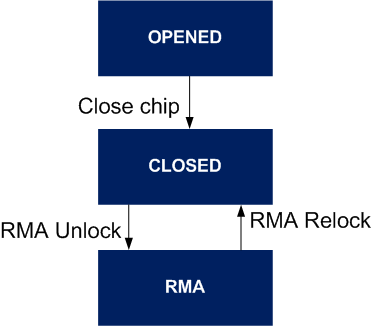 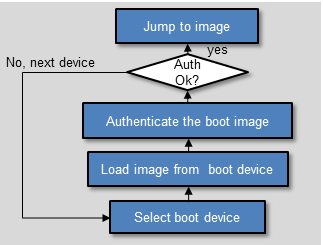 Note that it is possible to disable USB or some instances of UARTs by burning relevant fuses of OTP WORD 3. In all cases, i.e. whatever the USB is disable or not, HSE is mandatory.

The ROM code selects which HSE it must use by following these steps:

In case of serial boot, the ROM code applies the following AFmuxes.
The ROM code first muxes only the RX pins of bootable UART instances and scans in parallel all these RX lines. When an activity is detected on an UART interface, the ROM code muxes the related TX, all others RX are unmuxed, and the boot process goes on with this interface.

NAND contains n copies of FSBL in first valid blocks. If FSBL is using N blocks in the memory (N is usually 2 for a max 247KB FSBL with a memory having a 128KB block size), the ROM code scans blocks from the first and looks for FSBL in the first N consecutive valid block found.

Some serial NANDs are multi-planes. The ROM code supports such multi-planes feature when OTP bit OTP WORD9.spinand_need_plane_select is set to 1.

If OTP WORD9.nand_param_stored_in_otp value is equal to 0 (which is the default) then the NAND shall provide an ONFI compatible parameter table in which the ROM code looks for NAND parameters. “ONFI compatible ” means that a NAND provides get parameter feature that returns a table where at least parameters needed by ROM code are located at standard ONFI offsets.

The following table shows which parameters are needed by the ROM code:

Note that serial NAND are not ONFI compliant but that most of them are ONFI compatible.

In dual mode, BK1_nCS shall drive the two chip selects on board and BK2_nCS can remain unused or be used for other functions.

The ROM code first looks for a GPT. If it finds it, it locates two FSBLs by looking for the two first GPT entries which name begins with "fsbl". If it cannot find a GPT, the ROM code looks for FSBL1 at offset LBA128 and FSBL2 at offset LBA640.

If OTP WORD 3 sd_if_id field value is not equal to 0, the ROM code does not apply these settings and instead uses the non default AFmux values defined by OTP WORD 5 to 7.

If OTP WORD 3 emmc_if_id field value is not equal to 0, the ROM code does not apply these settings and instead uses the non default AFmux values defined by OTP WORD 5 to 7. 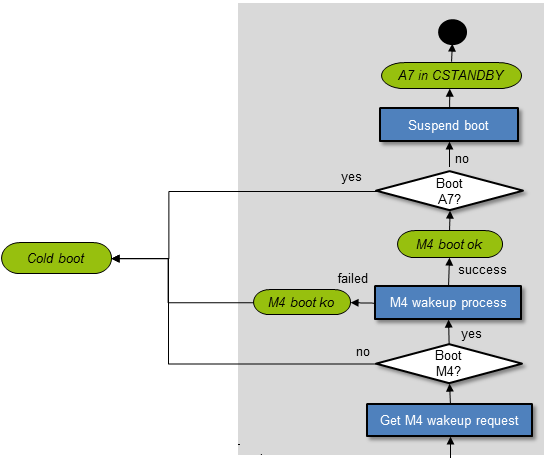 When the device is in unlocked for RMA : DFT tests (tests of the silicon done during production) are possible again, but without possibility to access any sensitive data stored in fuses by the user. For full list of locked fuses, refer to the STM32MP15 Reference manuals, "OTP mapping (OTP)" section, swprlock3 column.

These three words contains AFmux settings that the ROM code applies in case of secure boot, after having applied the default AFmux settings of selected boot interfaces.

The ROM code provides specific boot services allowing a user to store his own secrets in BSEC fuses in a secure way that guarantees the secrets confidentiality and integrity.

12.1.1 All cases except Engineering boot[edit]

After boot on any interfaces (following system reset or standby wake-up) or after engi-boot, PA13 is set in GPIO mode, Open-Drain, but in High-Z as ODR13=1 :