This article shows the default memory mapping defined by STMicroelectronics in STM32MPU Embedded Software. It uses a subset of all memory regions that are exposed at hardware level: customers may use other memory regions or aliases that are not shown here but are described in the STM32MP15 reference manuals.

Integration of Arm cores sets some constraints on the device memory mapping: the main ones are listed in this article.

Arm® Cortex® cores start running from address 0x00000000 on reset, which is why this address respectively points to:

The Cortex-M4 is connected to the interconnect (ML-AHB) via three ports, listed below and shown in the following figure: 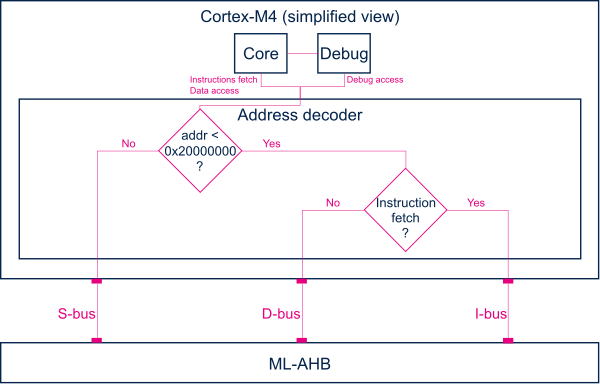 Balancing the Cortex-M4 firmware accesses among those ports allows tuning of the system performance, which is why the MCU SRAM is defined in the first address range (from 0x10000000), but is also visible in the second range (from 0x30000000) in the STM32MP15 reference manuals.

Nevertheless, it is important to notice that the Cortex-M4 embedded in the STM32MP15 only allows hardware breakpoints to be set on the address range covered by the I-bus. Thus any code accessed via the S-bus has to be debugged through software breakpoints.

The memory mapping below is a subset of all regions that are exposed at hardware level: it shows the default configuration used in OpenSTLinux but the customer may choose a different mapping to take advantage of other address ranges defined in STM32MP15 reference manuals. 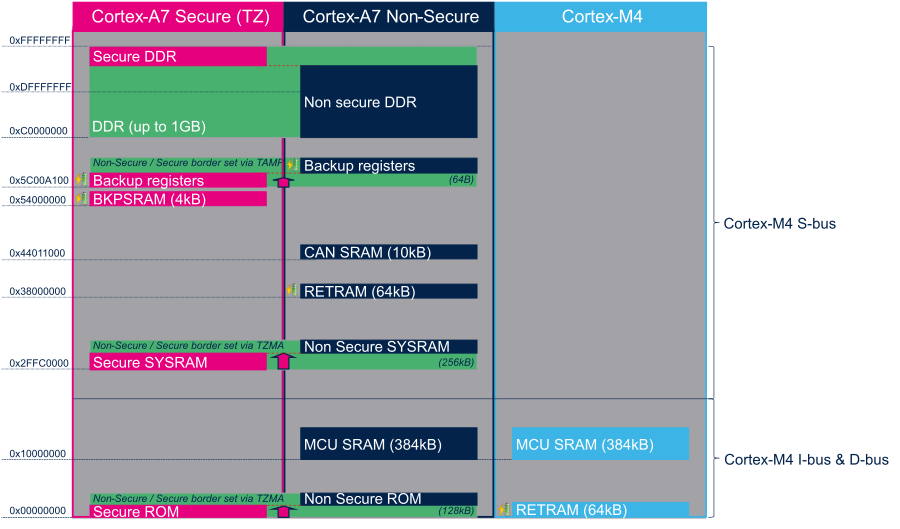 The figure below is a zoom of the RAM areas that are shared between the Cortex-A7 non-secure and the Cortex-M4. This mapping is STMicroelectronics' default implementation that can be freely adapted by customers to fit to other needs.