SUMMARY
The Crypto API is a cryptography framework in the Linux® kernel. It is dedicated to the parts of the kernel that deal with cryptography, such as IPsec and dm-crypt.

The purpose of this article is to introduce the Crypto API framework:

A hash is a string or number generated from a text string. The length of the resulting string or number is fixed and widely varies with small variations of the input. The best hashing algorithms are designed so that it is impossible to turn a hash back into its original string. Hashing is particularly useful to compare a value with a stored value. However it cannot store its plain representation for security reasons. This makes hashing an ideal solution to store passwords.

Encryption turns data into a series of unreadable characters which length is not fixed. The encrypted strings can reversed back into their original decrypted form if the right key is not provided. Encrypting a confidential file is a good way to prevent anyone from accessing its content. 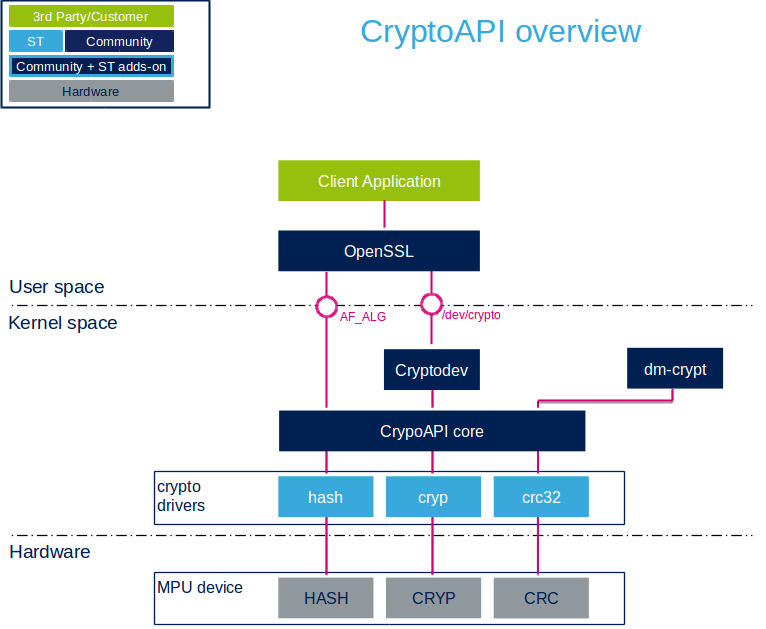 2.1 Description of the components[edit]

From User space to hardware

OpenSSL[1] is a software library supporting the TLS and SSL protocols as well as cryptographic functions. Openssl is available in OpenSTLinux distribution.

dm-crypt[2] is a kernel disk encryption subsystem. It is natively available in the standard Linux kernel.

Cryptodev[3] is a device driver which provides a general interface for userland applications. Although it is not part of the standard Linux kernel, it is available in OpenSTLinux distribution.

These are the cryptographic Linux drivers handling the HW blocks.

In addition to the socket user interface, a more friendly interface, the cryptodev, can be used. It offers the /dev/crypto ioctl API. It is roughly described by the cryptodev.h[6] header file. OpenSSL can be configured to use this interface as an alternative to the historical AF_ALG interface.

The Crypto API is activated by default in ST deliveries. Nevertheless, if a specific configuration is required, you can use Linux Menuconfig tool: Menuconfig or how to configure kernel and select:

4 How to use the Crypto API framework[edit]

The Crypto API framework can be used by other kernel modules.

This is a typical example of Crypto API framework usage. Refer to LUKS[8] for a standard disk encryption process.

The list of available ciphers is given in /proc/crypto:

Output part showing that an STM32 driver provides with the CRC32 cipher:

There are no specific traces for this framework.

There are no specific debug means for this framework.