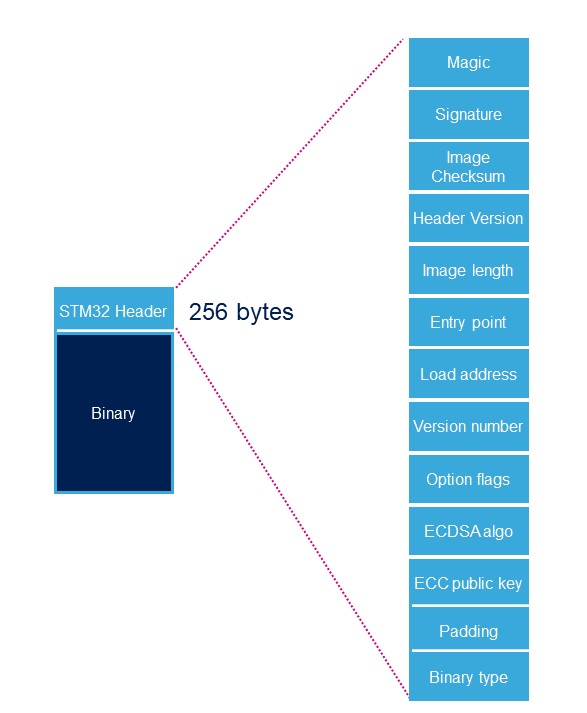 Each signed binary image includes a specific STM32 header added on top of the binary data. The header includes the authentication information.

1 Signature is calculated from first byte of header version field to last byte of image given by image length field.
2 32-bit sum of all payload bytes accessed as 8-bit unsigned numbers, discarding any overflow bits. Used to check the downloaded image integrity when signature is not used (if b0=1 in Option flags).
3 Length is the length of the built image, it does not include the length of the STM32 header.
4 This field is used by ROM code for specific executable images.
5 Image version is an anti rollback monotonic counter. The ROM code checks that it is higher or equal to the monotonic counter stored in OTP.
6 Enabling signature verification is mandatory on secure closed chips.
7 Hash of (algorithm+pubKey) is stored in OTP WORD 24 to 31.
8 This padding forces Header size to 0x100 bytes.

The ROM code provides secure services to the FSBL for image authentication with the same ECC pair of keys, so there is no need to support ECDSA algorithm in FSBL.
OTP WORD 24 to 31 are used to store the public key hash (PKH).

Once those steps are done, the images are ready to be programmed into the flash on the target board with STM32CubeProgrammer.

The device now contains the hash to authenticate images. The images and boot can now be flashed.

TF-A is in charge of loading and verifying U-boot and (if used) OP-TEE image binaries.

If the image authentication fails the boot stage traps the CPU and no more traces are displayed.

OTP WORD0 bit 6 is the OTP bit that closes the device. Burning this bit will lock authentication processing and force authentication from Bootrom. Non signed binaries will not be supported anymore on the target.

To program this bit, the STM32CubeProgrammer or U-Boot command line interface can be used. Here is how to proceed with U-Boot: