Difference between revisions of "Introduction to STM32Cube Expansion Packages"

On this page, learn how to create your own STM32Cube Expansion Package to challenge the limit of the ecosystem.

STM32Cube Expansion Packages are embedded software packages that complement the STM32Cube MCU Packages with additional software bricks, including specific drivers for external companion chips or application-specific middleware. They offer developers simplified implementations of real-world use cases in many application areas, such as sensing, power management, connectivity, and audio. They also contain preconfigured project examples for ST boards and supported IDEs to get started easily.

An STM32Cube Expansion enhanced for the STM32 Toolset is an evolution of the initial concept of STM32Cube Expansion. The new packages contain now a part readable and configurable into STM32CubeMX (or STM32CubeIDE) on top of ready-to-use project samples.

Three webinars have been prepared by our teams to show you a part of the capacity of the STM32Cube Expansion Do It Yourselves. Each video lasts approximately 1 hour and needs between half a day to one day to reproduce it.

An utility for multi-tasking without an operating system, which is a hardware-independent code.
In the example, a LED is managed through a GPIO.

This software component uses the DSP integrated in the core to generate an internal signal. This internal signal is then captured and displayed thanks to CubeMonitor. There is no interaction with the external hardware.

The application code frequently uses standard I/O library functions, such as printf(),scanf(), or fgetc() to perform input/output operations.The I/O library functions can be redirected to use different channels (peripheral) depending on the hardware and the application needs. The most common channels used for STDIN (scanf, getchar) and STDOUT (printf) are UART and USB Device Virtual COM port class. STDIN can retrieve data from a USB keyboard using the USB Host HID class.

Any software component is not adapted to the development of an STM32Cube Expansion enhanced for the STM32 Toolset. Indeed, the possibility of configurations is huge and not covered completely by the tools. Some other methods may be feasible but are not considered in the normal flow.

We refer to this list of questions to identify the right candidates. The questions must be taken in the generic understanding of the Industry.

- If yes, move to the next question
The concept is based on the usage of STM32CubeMX. We recommend starting only when you have already acted as a standard user of STM32CubeMX. If not, start downloading and opening STM32CubeMX, pick up an STM32 MCU, configure peripherals, generate the project for your preferred IDE and look at the result.

- If yes, move to the next question
My software is structured in functional units/components self-content from an architecture point of view.

- If yes, move to the next question
We exclude cases such as complex cases with different linker scripts, generating more than one binary file, if your software needs to dynamically adapt the run-time configuration. STM32CubeMX generates simple project structure (refer to the basic or advanced structure).

- If yes, move to the next question
We value working with partners and customers on the long run. The work related to the STM32Cube Expansion Package is valuable if you intend to upgrade it regularly with new versions of your software component. Therefore, the method could be done one time but needs to be thought on the long run.

- Take care: refer to STM32PackCreator limitation
Basic usage of timers is supported. Complex and advanced features are too complex to be implemented in our tools.

The design of an STM32Cube Expansion enhanced for the STM32 Toolset is usually done in three steps. In real work, several iterations are needed between step1 and step2 until the right result.

The methods to develop the step1 are explained through the video listed above or in the Getting started Pack Creator, accessible in the help menu of the STM32PackCreator.

Ensure that you have activated the PACKAGES STM32Cube RULES COMPLIANT in the STM32PackCreator.

Intermediate steps in this step1 may be:

To train yourself on the method, we recommend to go first to those Video & Tutorials, and then to read STM32PackCreator user manual.

You have obtained a pack enhanced for STM32CubeMX. This pack can be loaded, configured in STM32CubeMX and can generate the associated code.

You are going now to develop two to three examples on one or several STM32 boards. Those examples must of course be generated by the STM32CubeMX tool, using your pack enhanced for STM32CubeMX.

This step has two interests:

To execute it, you will act as a user of your pack enhanced for STM32CubeMX and execute the following actions: 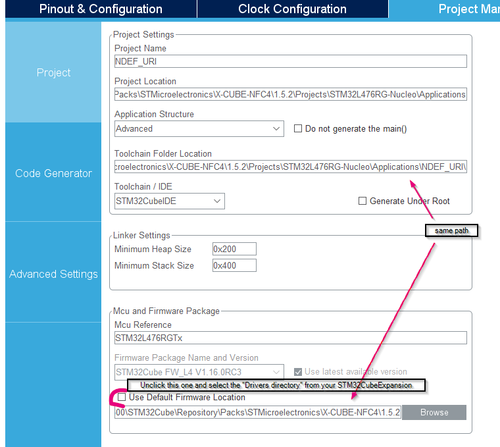 This is the final step. It integrates the outputs of step1 and step2 together into a package called STM32Cube Expansion Package. These packages are published on STMicroelectronics website with X-CUBE part numbers if they are distributed, maintained and supported by STMicroelectronics. Some packages distributed, supported and maintained by ST authorized partners are also exposed on STMicroelectronics website with I-CUBE part numbers. The interests of this step are that you deliver a single deliverable to your customer. - This .pack deliverable contains all necessary files to import software components and configure them in STM32CubeMX or STM32CubeIDE tool, and generate a project for any STM32-based hardware. - The .pack is in ZIP format and can also be unzipped and users can get started with ready-to-use project examples, pre-configured to compile in the 3 IDEs (IAR Systems® EWARM, Keil® MDK-ARM, and STM32CubeIDE) and run out-of-the-box on specific ST boards.

First, some cleanup actions are required:

Then, some documents must be written

Several examples of such documents can be found into Expansion Packages.

The documents must be referenced in the pdsc file using the following options (according to CMSIS-pack standard):

You can add some files and example projects in the additional files to the existing package thanks to the STM32PackCreator. You need to use Additional Files button.

You are done! You can now deliver it as is to your customers and partners.

If you want to go further and make it exposed in the STM32CubeMX tool, you can contact your ST local representative.

The STM32Cube Expansion structure top level is the following: 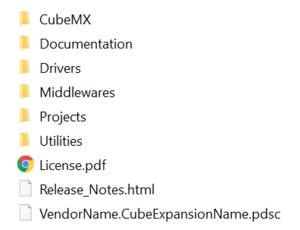 Here is an example of basic structure. 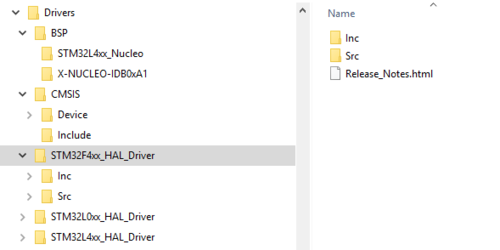 Other documents at the root of the package: 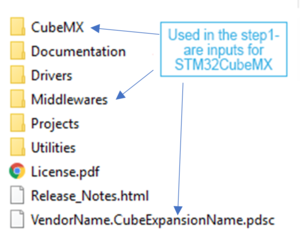 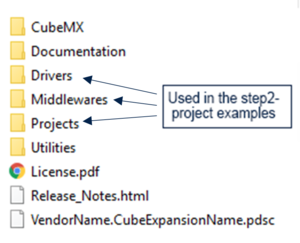 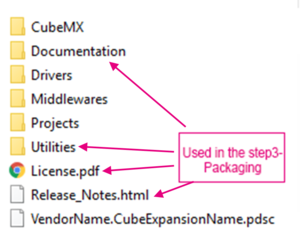 We do not test external Eclipse® plugin.

So far, this keyword is not used by STM32CubeMX.

STM32CubeMX allows some integration of java code to design complex user interface. This feature is not exposed to external plugins.

This is not possible and not expected. Indeed, your software component can be used with different series and so, this is not expected to pre-fill the parameters. Our recommendation is to provide some examples with a defined configuration to your users and also a “getting started” document.

STMicroelectronics does not support this case.

The pack ARM CMSIS can be opened with STM32CubeMX but as some components are also coming from STM32Cube MCU Packages, you may face some incompatibilities. Take care about them.