Difference between revisions of "Introduction to FILEX"

Azure® RTOS FileX is a fully compliant FAT library for media storage and file system management. It supports standard filesystem operations such as media formatting and file/directory management. FileX is designed in a modular way that facilitates the integration of any media storage. 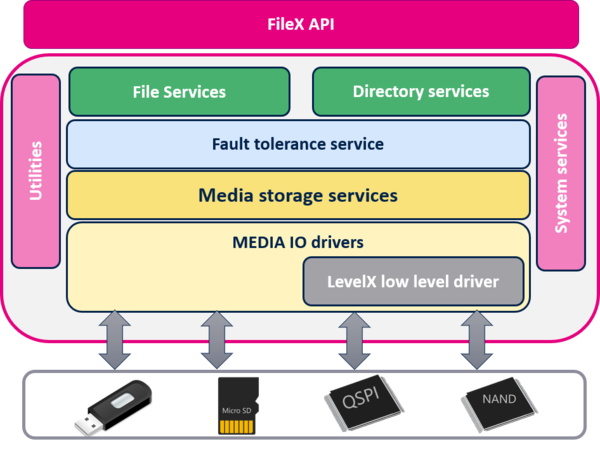 FileX supports FAT16, FAT32 and extFAT formats. It offers a set of APIs to deal with files and directories such as create, delete and read/write. FileX supports both utf8 and Unicode coding as well as the "Long File Name” features to ensure filesystem compatibility between MCU and modern PCs. It also ensures the integrity of the file system via the failsafe feature (fault tolerance) especially for Flash memories where “power loss” may damage the data content and break the whole file system.

Further details are available in the FileX official documentation[1]

FileX supports common media storage devices such as µSD. Combined with LevelX it can also support file systems on NAND and NOR Flash memories.

The media devices below are supported in the context of the STM32:

In all cases, FileX requires a low-level driver to interact with the underlining media storage device. 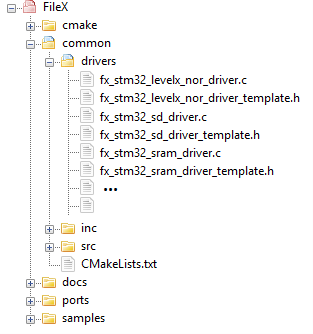 The figure below illustrates how FileX is used in conjunction with LevelX to read and write NAND and NOR Flash memories :

FileX provides continuous file support through the fx_file_allocate function . This function attempts to allocate the number of consecutive clusters required to satisfy the user's request. If there are enough clusters, the clusters are allocated and linked to the file. Otherwise, an error code is returned to the caller. This feature can significantly improve performance and reduces access time.

FileX fault tolerance is designed to prevent file system damage due to interrupts occurring during file or directory update. For example, when adding data to a file, FileX needs to update the content of files, directory entries, and possible FAT entries. If this update process is interrupted (for example by a power failure or by media popping up during the update process), the file system is inconsistent, which may affect the integrity of the entire file system, resulting in corruption of files.

The FileX fault tolerance function works by logging all the steps required to update the file or directory during the update process. The log entries are stored in a dedicated sector that FileX can find and access. The location of the log data can be accessed even if there is no appropriate file system. Therefore, in the event of a file system interruption, FileX can still find a log entry and restore the file system to a good condition.

This fault tolerance function can be used for all the FAT file systems supported by FileX, including FAT12, FAT16, FAT32, and exFAT. By default, fault tolerance is not enabled in FileX. To enable it, use the fx_fault_tolerant_enable macro definition to build FileX. At run time, the application starts fault-tolerant service by calling fx_fault_tolerant_enable. After the service is started, all files and directory write operations are performed through the fault tolerant module.

ThreadX is typically required to run FileX. However, it is possible to use FileX in Standalone mode, that is without ThreadX integration, by enabling the FX_STANDALONE_ENABLE flag. Using FileX in Standalone mode allows the reduction of code footprint by removing ThreadX files and libraries from the project. Application complexity can also be reduced by removing constraints around thread management.

Unless FX_SINGLE_THREAD or FX_STANDALONE_ENABLE flags are activated, all FileX operations are thread safe.

A FileX based application has two methods to instantiate a media storage driver:

The two main items used in the above APIs are:

Note: fx_system_initialize() has to be called before calling any other fx_xxx() API

The FileX NOR Flash low-level interface APIs have a modular generic multi-instance architecture that allows simultaneous use of several IP instances. To use the multi-instances feature, the instances shall be defined in the fx_stm32_levelx_nor_driver.h file.

The main steps to use FileX NOR driver are:

4 Migration from FatFS to FileX[edit]

The following tables summarize the most commonly used APIs for FatFS and their equivalent on FileX side.

STM32 Packages provide the following set of applications (the supported applications list may differ between products and boards):